For a better visiting experience, it is recommended that you use a higher version of IE (IE11 or above), Chrome or Firefox browser.
Musk says Tesla is 'very close' to full autonomous driving
Jul 9, 2020 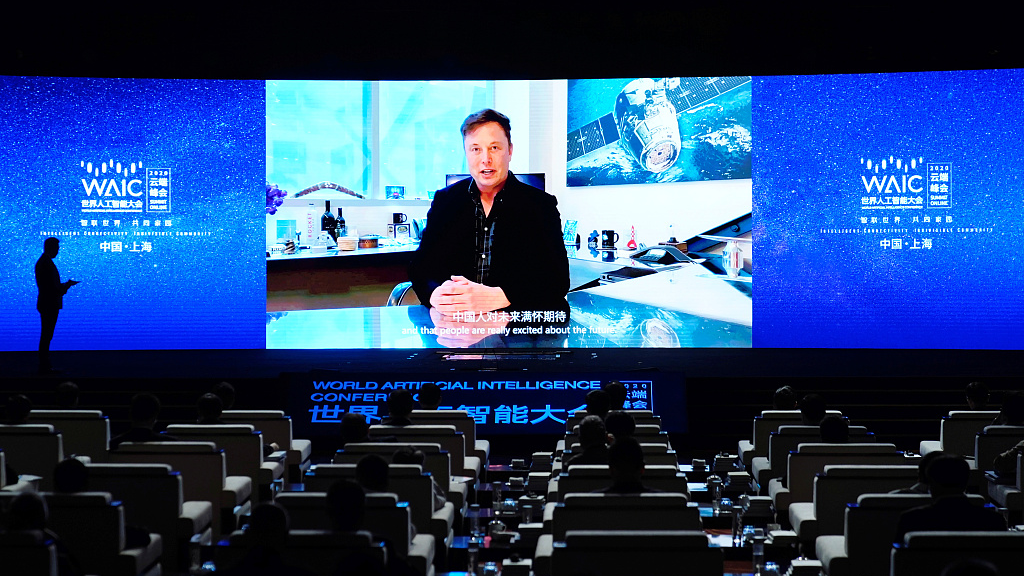 Elon Musk is seen on a screen during a video message at the opening ceremony of the World Artificial Intelligence Conference in Shanghai, China, July 9, 2020. /Reuters

Tesla is "very close" to achieving level five autonomous driving, a 100 percent driverless technology, the company's co-founder Elon Musk said in remarks made via a video message at the opening of Shanghai's annual World Artificial Intelligence Conference on Thursday.

"I'm extremely confident that level five or essentially complete autonomy will happen," Musk said, adding that the basic functionality for level five autonomy could be completed this year.

Automakers and tech companies including Alphabet Inc, Waymo and Uber Technologies are investing billions in the autonomous driving industry. However, industry insiders have said it could take time for the technology to be ready and for the public to fully trust autonomous vehicles.

Autonomous vehicles were initially thought likely to prevent car crashes caused by human error and be a game changer for road safety.

But a recent study carried out by the U.S. Insurance Institute for Highway Safety (IIHS) suggested only about a third of human-error-induced crashes were the result of mistakes that automated vehicles would be expected to avoid.

"It's likely that fully self-driving cars will eventually identify hazards better than people, but we found that this alone would not prevent the bulk of crashes," Jessica Cicchino, IIHS vice president for research and a co-author of the study, said in a press release.

As of September 19, 2019, there were five confirmed semi-autonomous driving fatalities related to Tesla's Autopilot. In February, an Apple employee was reported to have died when using Tesla's Autopilot mode after his car hit a concrete barrier.

The investigation said the man was playing a video game when the vehicle steered into a motorway intersection and accelerated into a concrete barrier, according to a BBC report.

(With input from Reuters)